March 11, 1998 (CNN) -- The power of smell is undeniable, as the multi-billion dollar perfume industry testifies. But is it possible that humans are influenced by airborne chemicals undetectable as odors, called pheromones?

Though any number of animals and insects use pheromones to communicate with each other about important things such as food, territory and sex, the idea that humans might be similarly influenced has been controversial among scientists.

But now, researchers at the University of Chicago say they have the first proof that humans produce and react to pheromones.

In findings published in the journal Nature, researchers say they found that female ovulation can be regulated -- made longer or shorter -- through the use of pheromones. 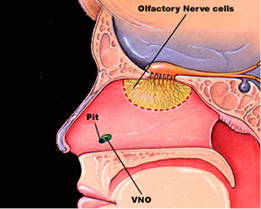 "The pheromones regulate the time of ovulation. There are two pheromones -- one that makes ovulation more likely and the other that suppresses it and makes it less likely," said Martha McClintock of the University of Chicago.

There could be important practical implications from this finding. Because pheromones influence the release of eggs, researchers say they may provide a more natural way of preventing pregnancy or treating infertility.However, researchers say more study is needed to find out if there are other types of pheromones and if they are as powerful in humans as they are in other species.

One enduring mystery of pheromones is that if they are undetectable by the human sense of smell, how can humans be influenced by them?The answer, some researchers believe, is that pheromones are detected by the same nerve cells in the nose used to detect odor or perhaps by another structure in the nose called the vomeronasal (VNO).